Cooperation with the Dutch airline began in October 2015. The first order was painting seven Embraer 190 aircraft. The next service was performed on Embraer E170 / E190 aircraft. Over the past four years of cooperation, LOTAMS employees have worked on the KLC fleet a total of almost a quarter of a million man-hours, including painting, base checks of type C1 / C2 / C3 / C4 and repairs of individual aviation parts that are subject to wear or to periodic maintenance.

The base maintenance of Embraer aircraft is one of the flagship services of LOTAMS. We service E-jets of airlines from around the world (including PLL LOT, British Airways CityFlyer, Air Dolomiti, Air Moldova and Montenegro Airlines). LOTAMS and KLC already had several years of fruitful cooperation. We are pleased with the further prospect of cooperation and we will do everything in our power to better adapt to customer requirements in the field of services provided on the MRO market – commented LOTAMS CEO – Aleksandra Juda.

The newly signed contract is concluded for 5 years, and its first stage includes maintenance of 17 Embraer 175 and Embraer 190 aircraft. The first aircraft arrived in Warsaw on October 27. Three planes with registration numbers PH-EZC, PH-EZS and PH-EZY landed after 10:30 local time at Chopin Airport. The planes landed one after the other, only a few minutes apart. A team of six crew members returned the same day with another blue carrier flight to Amsterdam. LOTAMS employees were properly prepared to receive planes and after completing operational procedures at the airport and setting the planes to selected slots on the apron, three teams, each consisting of two mechanics and a driver, towed the machines from the airport to the LOTAMS facility. With the approval of the tower and the airport dispatcher, we were able to observe the unusual situation, i.e. towing of two planes simultaneously. The third plane, due to the allocation of slot at the end of the airport, could not be towed at the same time and arrived at LOTAMS facility several minutes later. On Monday, October 28, maintenance operations for Dutch aircraft began. The PH-EZY aircraft stood in hangar #1 for painting, and PH-EZC and PH-EZS stood on two adjacent slots in hangar #4 initiating a base check campaign.

KLM Cityhopper is a wholly-owned subsidiary of KLM Royal Dutch Airlines and an independent operating carrier, feeding its European flights into KLM’s vast intercontinental and European network. As of April 2018, KLM Cityhopper has a total fleet of 49 Embraer E190s and Embraer E175s, making it the leading European customer for the Brazilian aircraft manufacturer. KLM Cityhopper operates flights to 72 scheduled European destinations and is also an AOC holder. On average, KLM Cityhopper operates more than 300 flights a day year round and brings over 8 million passengers to their destinations every year. In addition, KLM Cityhopper provides extensive service to its customers through various digital means, such as its social media channels. In 2015, the airline was elected as ‘The Regional Airline of the Year’ by Air Transport News and together with KLM, was named the most punctual airline in 2016 after being ranked the number one international airline for on-time performance by FlightStats.

LOT Aircraft Maintenance Services (LOTAMS) is a part of the capital group Polish Aviation Group. The company offers a full range of technical support at the level of base and line maintenance as well as aesthetics and workshop support. The company operates as an independent entity since 2010, continuing its 90-year-long tradition of functioning as a LOT Polish Airlines Technical Base. Responding to customer needs and challenges posed by the dynamically changing aviation industry, LOTAMS is constantly expanding the range of services offered, focusing primarily on the continuous development of highly qualified personnel. The company employs over 1,000 specialists who are able to provide continuous, uninterrupted service on seven service lines simultaneously with appropriate support for line service and extensive workshop facilities (including non-destructive testing, composites workshop, electrical systems and avionics). Activities tailored to the needs of the market are possible thanks to specialized internal training, which gives the PART-147 certificate. In addition, LOTAMS employees also take part in training sessions organized by aircraft manufacturers, thanks to which the company is ready to service the most modern aircraft in the world. A wide range of aircraft serviced in conjunction with experienced staff performing technical services at the highest level make LOTAMS a recognizable base on the European market, which airlines from around the world entrust their fleets. 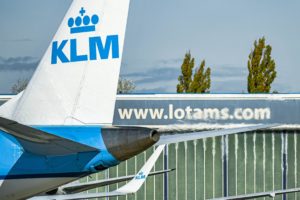 Thank you for visiting our website. In the context of your provision of personal data, in pursuance of information obligations arising from Art. 13, p. 1 and 2 of the Regulation (EU) 2016/679 of the European Parliament and of the Council of 27 April 2016 on the protection of natural persons with regard to the processing of personal data and on the free movement of such data, and repealing Directive 95/46/WE (General Data Protection Regulation). It introduces a number of changes, important especially for the online market.

We are the administrator of your personal data as the owner of the website you are currently using. Our full data can be found in the Privacy Policy and Cookie Policy available on our website. If you give us any consents that we ask for, your details will be provided to us.

In order to provide the highest quality of services on our website, we use the so-called cookies in order to: better selection of presented content, personalize ads, and to analyze traffic on the site. Some third parties require your consent to collect data to be able to display personalized content and ads to you. Thanks to this use of cookie technology, we are able to broadcast ads that best match your preferences.

By clicking the „I understand, thank you” button, you agree to the provisions above.

You can edit your consents at any time (also completely withdraw them) by following the instructions on the page of our privacy policy.